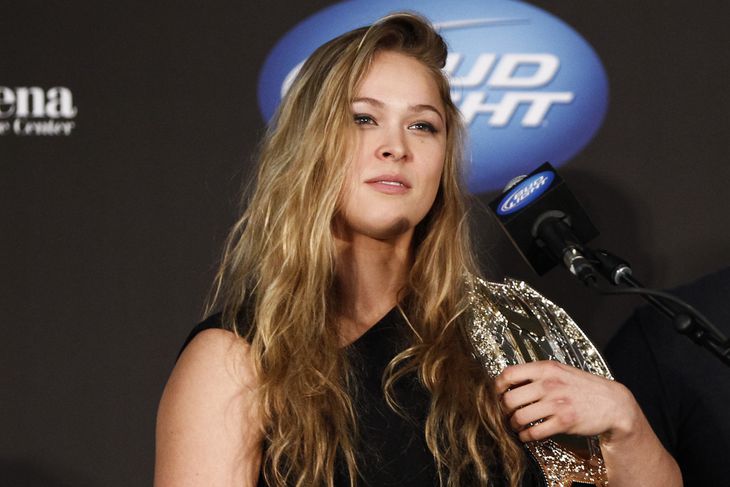 Well, another win for Ronda Rousey and another quick one. This time instead of the armbar, she knocked out her opponent Bethe Correira at UFC 190 in Brazil.

In the old timers division, Shogun Rua beat Antonio Rogerio Nogueira (Lil Nog) via unanimous decision. They had a good fight in 2005 while in PRIDE FC, not sure if they duked it out with canes tonight.

And then of course Antonio Rodrigo Nogueira (Big Nog) lost to Stefan Struve via unanimous decision to make the few PRIDE FC fans left weep as hard as they did when Ultimate Fighter bad boy and bed wetter Chris Leben knocked out Wanderlei Silva in 33 seconds.

Yes, another UFC goes down in the books.

There was also the Diaz brothers fighting UFC lightweight contender Khabib Nurmagomedov in the crowd at WSOF 22 (which also took place tonight).

Stay classy guys. You’re great ambassadors for such a sport.

At least the MMA gods looked down on their trailer trash antics when fellow trainee and buddy Jake Shields lost via submission (kimura) to Rousimar Palhares in the main event.

Speaking of which, that is a guy who should be fighting in the welterweight division in the UFC and was wrongfully released for kicking Mike Pierce’s ass too badly. He can actually finish fights, unlike funky Ben Askren (another welterweight who has failed to get a UFC contract).

A solid night for MMA indeed.